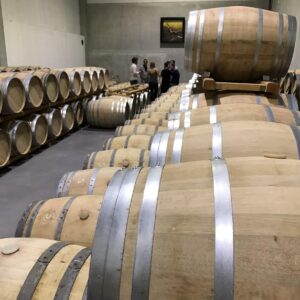 You are visiting our winery and suddenly we reach one of the key points. The barrel cellar. Where the wine rests and where time gives it elegance and length. The picture is evocative, with dozens of barrels placed in rows and dozens of sensations of aromas and textures also lined up asking for attention one after another.

And among so much stimulus something always catches the eye… a work of art hanging on the back wall. A vine that now rests after having been productive for many years and that now enjoys the spectacle of the fruit it once bore.

The painting never goes unnoticed and quickly someone always asks about it. And our mouths are full when we say it. It is “La Cepa”, by the great Marcos Tamargo and it was the first work of art in Territorio Luthier.

Because in 2018, when we inaugurated the winery, we also inaugurated a beautiful tradition and that is that every harvest an artist comes to discover how these special days are lived with us and with the perceptions, sensations and emotions he feels in Territorio Luthier he makes a painting that will later be part of our winery.

That first vintage we had the honor of receiving Marcos Tamargo, and since then his work “La Cepa” can be admired in our barrel cellar. It is also the work that will be reproduced on the label of the wine “Las Cepas de Luthier”, wine with which begins the collection of unique and personalized wines for participants in 2020 in our initiative “Pon tu nombre a una cepa”. 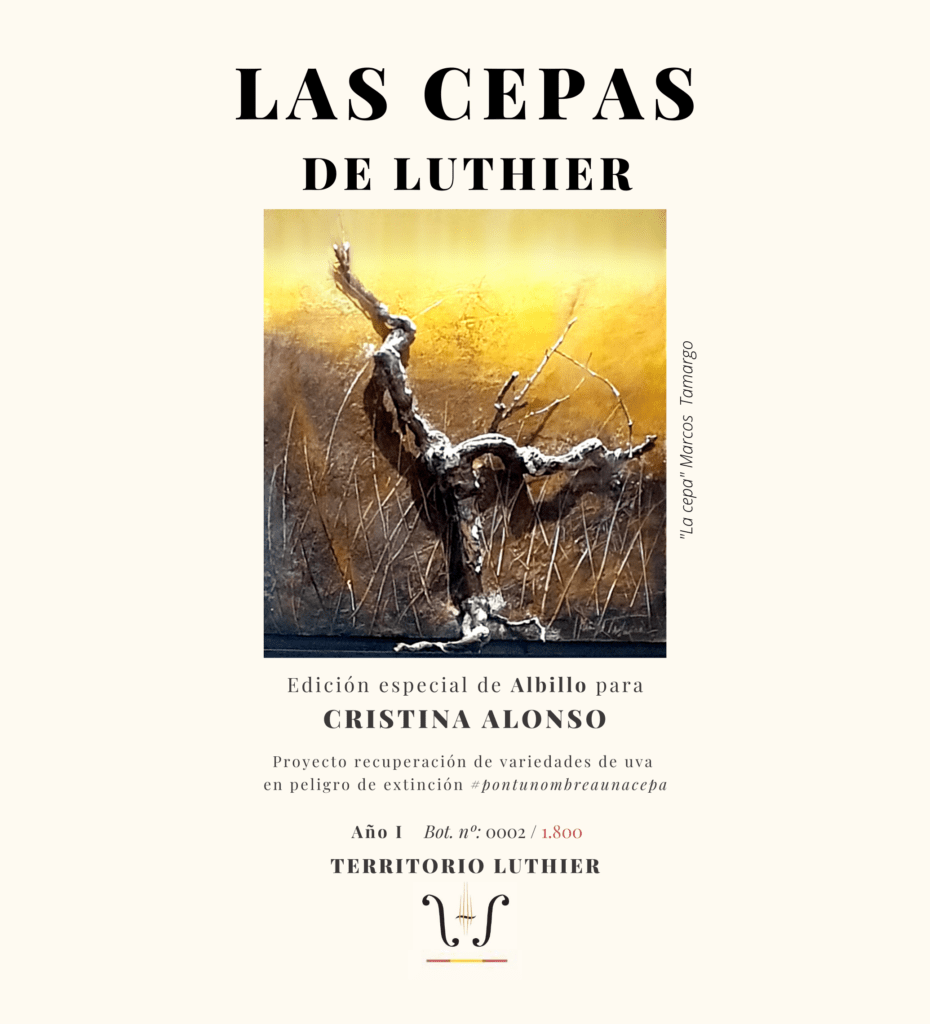 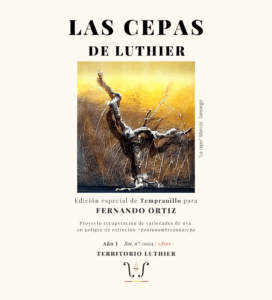 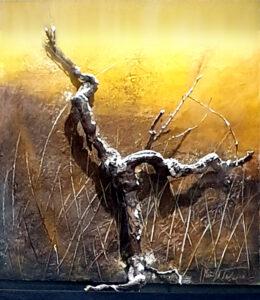 “La Cepa” was born in October 2018 when we invited Marcos Tamargo to experience the grape harvest in our winery. It was the first harvest in the newly opened winery and it was going to be a very special experience. During that time, which Marcos himself defines as “unforgettable” he was able to enjoy the magic that this time of the year has.

“During that time I was able to walk through all the vineyards, with old vines of different ages. I was able to step on the “arid” land. I was able to touch the clusters and all that material. And meet the protagonists. It was a great inspiration. In the work I tried to symbolize all that, starting from the dry land that does not seem fertile and the strength of the vine, of those vines that withstand all kinds of temperatures and give us their fruit. The scars in the painting symbolize the scars of the earth and also those of all the people who live from this activity, those who work in the entire production chain from the vineyard until someone drinks the wine at home or in a restaurant”. Translated with DeepL

The work is 100% mixed media on board, with earth colors, ochre, earth and toasted shades. Colors very much from Marcos Tamargo’s palette.

“I found similarities between Kenya and Castile, in the land and the colors and this painting has certain reminiscences of the series of paintings that I elaborated after my trips to Africa “Man and the horizon”.

As an artist Marcos is a painter who works mostly in an abstract-figurative language, creating especially vital pieces by always having a very close relationship between the work and his personal life. One of his most important and recognizable characteristics is the use and transformation of matter in the form of textures, collected in the different places or situations of which his work speaks, to capture on canvas its very essence in a palpable way. For the vine stock, as a “material” painter, he collected material from the vineyards themselves, which he used in the painting after dipping them in varnish so that oxygen does not enter, oxidation does not occur and there is no deterioration. 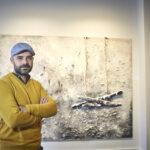 Marcos Tamargo(1982 – Present) is a Spanish plastic artist born in Gijón, Asturias. Despite his young age, he is one of the most prominent young artists of the Spanish painting scene, as he has several works in museums and private collections such as The Hispanic Society Museum, National Heritage, European Center for Nuclear Research (CERN), Princess of Asturias Foundation, Infanta Elena Museum, Ministry of Foreign Affairs and Cooperation of Spain, etc., as well as in galleries in the United States, Europe and South America.

Marcos has been in charge of portraying all the recipients of the Princess of Asturias Award, and H.M. King Felipe VI, for 5 years. Since 2019 he has been chosen to portray all the women distinguished with the Nobel Prizes. He is the ambassador in Spain of the prestigious paint brand Winsor & Newton.